Lately I have been trying not to make the Pioneer Woman's recipes. The problem is not that they are bad. On the contrary, they are usually very good. Too good. And very rich, which is not at all helpful when you are trying to lose weight.

Have I mentioned that I have lost 50 pounds in the last six months?

Okay, almost 10 of those pounds was Ray, but still!

I didn't lose the weight by eating Pioneer Woman recipes every day, that is for sure. I will talk in future posts about what has been working for me, as far as eating healthier and getting into shape. For now, I will just say this: I do occasionally have treats. I love to make dessert, but I try to do it when there are plenty of other people around to eat the sweets with me. Otherwise I will end up eating the whole thing. No will power, people!

If you want a summer treat, this is a great recipe to try. One of the guests that I served it to even said, "I could eat this all day!" I tweaked the recipe just a little bit, using a little less sugar than Pioneer Woman, and substituting greek yogurt instead of regular. Oh, and just a tip - definitely make your own Oreo crust like the recipe says, the storebought versions just aren't as good! 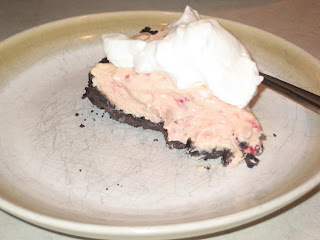 
Preheat oven to 350F. In a food processor, pulse the cookies until they are crushed. Before I had a food processor I would put the cookies in a ziploc bag and use a rolling pin to crush them! Mix the melted butter in with the crushed cookies and press them into the bottom and up the sides of a pie pan. Place in the oven and bake for 3-4 minutes, just so the crust hardens. Remove from oven and set aside to cool.


Wash raspberries and spread out on a plate. Sprinkle the sugar on top and let them set and sweeten while you mix up the other ingredients.


Combine the yogurt and pudding mix (just the powder) in a mixing bowl. Beat on low for 1 minute. Add the heavy cream and beat on low for 30 seconds. After pausing to scrape down the sides of the bowl, beat on medium-high for 2 minutes or until mixture is thick.


Gently fold the raspberries into the cream mixture, then spoon into the cooled pie crust and spread evenly. Freeze for at least two hours so the pie can set. About 20-30 minutes before serving, remove the pie from the freezer so that it will be easier to serve. It tastes yummy straight from the freezer, but it is hard to cut when it is frozen! Garnish with whipped cream and raspberries. 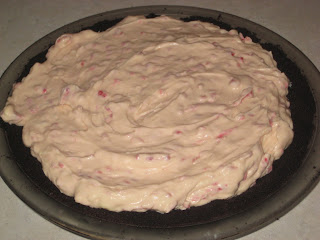 What is your favorite summer dessert?