Confession: until yesterday I had never even tasted Butternut Squash Soup, much less purchased a butternut squash and attempted making it myself. But this recipe, adapted from one found in a Taste of Home magazine, won me over. Give it a try, it's easy and delicious! 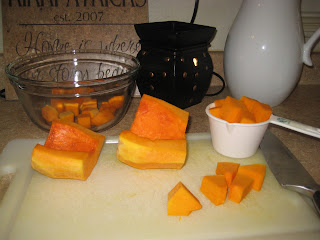 Start by peeling and cubing the squash. It's the most time consuming step, so I like to get it out of the way first. 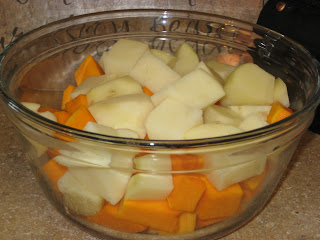 Add the potatoes to the squash and set aside. 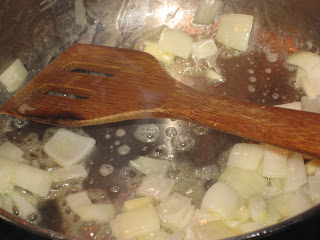 Saute the onion and garlic in the butter until the onions are tender. 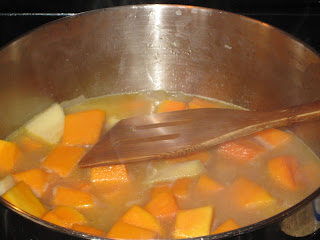 Add the squash and potatoes. Stir and cook for two minutes, then add the broth, salt and pepper. Bring to a boil. Reduce heat and simmer, covered, for 15-20 minutes or until vegetables are tender. 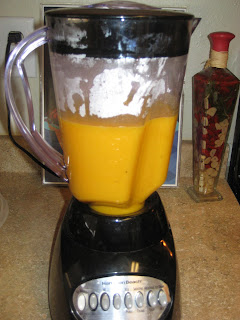 Let cool slightly, then puree in blender. I had to do half the mixture at a time, as my blender isn't large enough to handle it all at once. 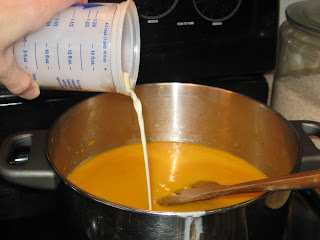 Return to pot and add milk. Yes, that is milk running down the front of the pot. Apparently it is difficult to pour milk and take a picture at the same time. For me, anyways...
Heat to desired temperature then serve.
This recipe is featured in Menu: Week of November 15-21.
Posted by Heather at 4:24 PM