I have been wanting to make Braciole (pronounced bra'zhul) ever since I watched the Everybody Loves Raymond episode where Deborah makes it. Up until this particular episode, the only thing she cooks well is Lemon Chicken, coincidentally also on this week's menu plan. So when Deb makes a delicious Braciole, Ray and Frank can't get enough of it and Marie gets quite jealous. Hilarity (including Deb dumping tomato sauce all over Ray's pants, on purpose of course) ensues...

So back to Braciole. There are all kinds of fancy ways to prepare this dish including expensive cheeses, prosciutto, currants, etc but I decided to start with a very basic recipe. I already had all of these ingredients on hand, just had to pick up the meat. I thought the result was simple and delicious, although I had company over when I served it so I neglected to take pictures of the finished product. 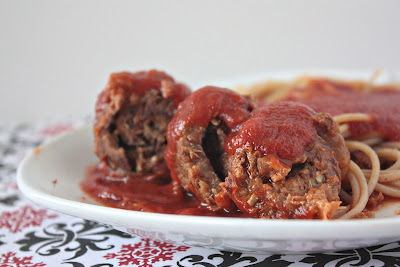 The above picture as well as the recipe is courtesy of Momma Hen's Kitchen. The pictures of the cooking process are all me, for better or worse. 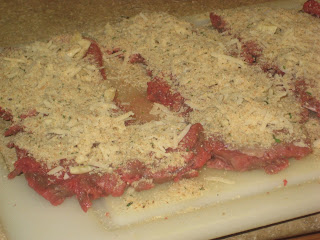 Pound out the steak until thin enough to roll (somewhere between 1/4" and 1/2" thick). Sprinkle each piece with 1 Tbsp each of garlic, parmesan, and breadcrumbs. Season with salt and pepper. 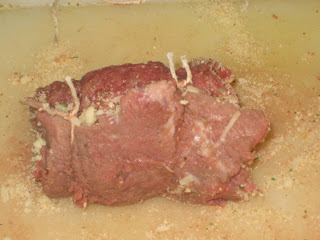 Roll up each piece of steak and secure with kitchen string. 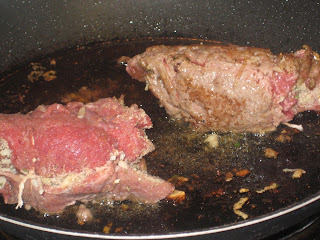 Heat olive oil in a skillet over medium-high heat and brown each roll of meat.

Once browned, place in saucepan with spaghetti sauce over medium heat. Heat until bubbling then turn down to low and simmer 2 hours, stirring occasionally. If the sauce starts to cook down too much, you can cover the pot with a lid. 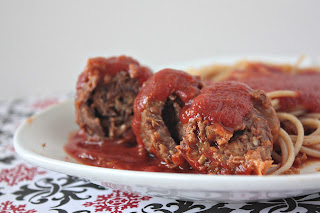 Remove from pot, cut each roll into 4 slices and serve with sauce over spaghetti noodles.
Posted by Heather at 8:51 AM