Lately I've been starting to look at dishes that I cook as a production, like a play. Some plays, you can just look at the actors on the bill and know that the end result will be enjoyable to watch. Likewise, with some dishes, I can just look at the ingredients (or cast, if you will) and know that I will enjoy the dish. Now, just as there are some plays who despite an all-star cast just aren't good, there are dishes that similarly don't live up to the ingredients placed in them. However, in the case of this dish, the recipe does justice to the ingredients.

Just look at this cast:


And the ingredient that makes me swoon...

It may not look like much, but just a whiff of fresh ginger is all I need to put a smile on my face.

Are you intrigued yet? Take a look at the rest of this recipe, then. It might appear like another simple chicken and rice dish, but this Indian meal is full of subtle flavor that makes it a hit in our house.

Adapted from a recipe found in a Taste of Home magazine. 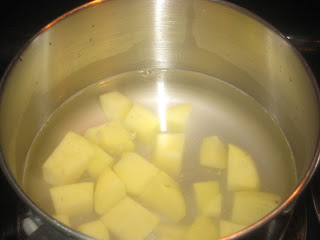 Peel potato and cut into 1/2 in chunks. Place in a small saucepan, cover with water and bring to a boil. Reduce heat to low and simmer, covered, for about 15 minutes, until tender. Drain and set aside.

While potato is cooking, mince garlic and gingerroot and place in a small bowl with curry powder. Set aside. 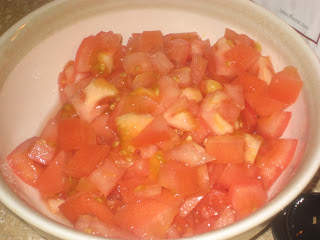 Chop the tomatoes, place in another bowl, and set aside.

Cut the chicken into 1/2 in chunks and set aside. 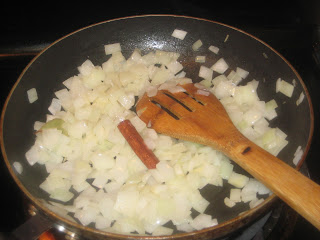 Chop the onion. In a large skillet saute the onion, cinnamon, bay leaf and cloves in oil until onion is tender. It should be very fragrant at this point. 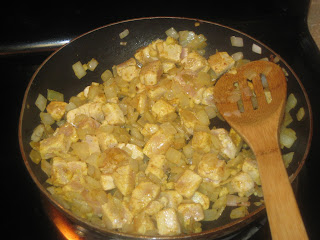 Add the chicken, garlic, curry and ginger, cook and stir 1 minute longer. I use medium to medium-high heat. 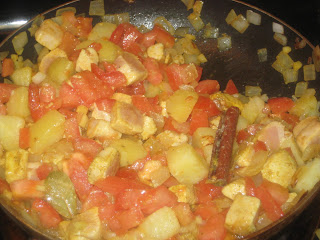 Stir in the tomatoes, salt and potato.Cover and cook for 10-15 minutes or until the chicken is cooked through. 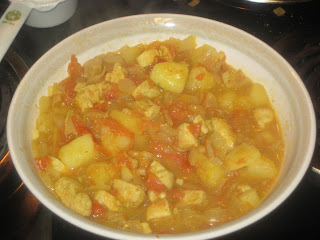 Remove from heat and pull out the cinnamon, bay leaf and cloves. At this point I was wondering why it didn't look like it normally does, until I noticed the half cup of sour cream in the top left corner of this picture, waiting to be stirred in. Duh. 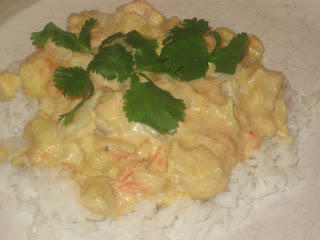 Serve over rice, garnish with cilantro, if desired. Obviously I have not mastered the art of garnishing with cilantro. Mine looks pretty lame. But the food was good!
This recipe is featured in Menu Plan: December 20-26.