You know those fabulous mashed potatoes they serve at restaurants such as Applebee's and Ruby Tuesday? The ones with the skins still in them that are so delicious you want to lick your plate when you are finished (but hopefully you don't, because that could be weird)? Well, this is how to make them at home.

Disclaimer: this is not a low-fat recipe. We try to save it for special occasions only. Feel free to make them more frequently (trust me, I understand, they are to die for!) but don't blame me if you can't fit into your pants next month.

Adapted from a recipe on foodnetwork.com by Ina Garten. 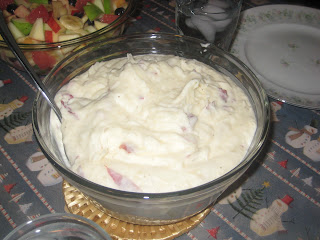 
Place the potatoes and a little salt in a large saucepan and cover with water. Bring to a boil and cook for 20-25 minutes, or until potatoes are tender when pricked with a fork. Drain potatoes.

I didn't take many pictures for this recipe because it was Christmas Day and things were crazy, but I did have to take this picture of the potatoes in my new 7.5 quart stock pot/dutch oven. Isn't she a beauty?! 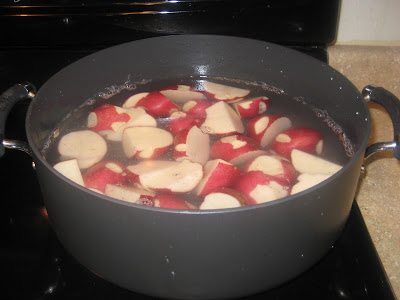 In a small saucepan, heat the cream, milk and butter. Put the potatoes into the bowl of an electric mixer fitted with a paddle attachment and mix the potatoes for a few seconds on low speed, to break them up. Slowly add the hot cream and butter to the potatoes, mixing on the lowest speed (the last quarter of the cream should be folded in by hand). Fold in the sour cream, Parmesan cheese, season according to taste and serve immediately. If the potatoes are too thick, add a little more milk. 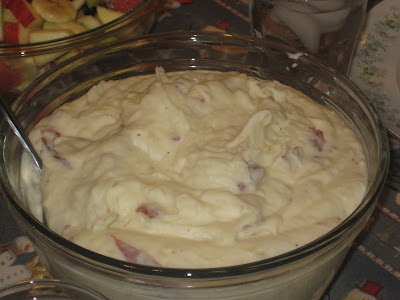 Email ThisBlogThis!Share to TwitterShare to FacebookShare to Pinterest
Labels: potatoes